Series: When Love Comes to Town

We are concluding a series called “When Love Comes to Town.” We’ve looked at the transformations that happened in the lives of individuals and groups as they came face to face, quite literally, with the power of Jesus.

We’ve also begun an emphasis, that will continue beyond this series, called 4 the City, challenging us to make baby steps in leveraging the life transformation we have received as a result of our own encounters with Jesus.

Today we’re looking at another encounter Jesus had with an individual that had profound effects on not only the man healed, but also his family and the community around him.

The story of the Blind Man Healed in John Chapter 9, dating back to early church history was a traditional Lenten sermon preached, on a journey that landed on Easter, which emphasized baptism. This story is surrounded and saturated with the symbolism of water, and the cleansing nature it has, highlighting our need for forgiveness from the stain of our sins.

This past Wednesday, there was a day set aside for the “forgiveness” of sins, as Christians enter into the six-week procession into Easter, where we celebrate Christ’s breaking of the chains of sin and death that bind us. While we don’t officially plan our calendars around a Roman Catholic Calendar of seasons, we live in a city where we will constantly be reminded of the season, whether it is simply because of the Friday fish-fry on every corner, or other reasons, it is definitely heathly to be reminded regularly of the importance of fasting and prayer.

How appropriate then, for us to conclude this series and begin the Lenten season with a story of transformation, and Jesus’ continual challenge to the rigid, religious leaders’ regarding their stubborn grip on the law above a relationship with God.

We’ll be in John Chapter 9 verses 1-12 today. In chapters 7 and 8 Jesus has just challenged the religious leaders at the largest festival in the Jewish calendar, by declaring himself the SOURCE of the living water they have been waiting for. The reaction of the most passionate Jews being to try and stone him. In the face of an extremely violent religious group, Jesus does not slow down, and this is where we find him in Chapter 9.

We find Jesus and his disciples passing a man who was blind from birth. This was most likely common knowledge for many of the people in the area. They knew him, he was ostracized, probably because people associated a strong correlation between a serious affliction and serious levels of sin in a person’s life.

They Asked the Wrong Questions:

Blindness, like so many other illnesses in the ancient world were without cures or treatments, and superstitiously associated with specific sins rather than a larger problem of sin an brokenness in the world. It would be easy for us to disassociate ourselves from the disciples asking the questions or the doubting religious leaders, and primarily identify with the man who was healed.

However, far too often we get caught up in the weeds, and trapped in the questions we think we need answers to before God is allowed to work. Jesus very quickly, waves-off the debate he knows will distract from the ultimate purpose of their interaction with this man.

While Jesus knew there were scholars at that time debating on whether a child could commit sins while still in the womb. Instead of speaking into the debate that would detract from his ultimate purpose of pointing people towards the transforming power of God, he gives a simple answer.

Neither. Neither the man or his parents sinned to cause this. THIS was so that the glory of God might be displayed in his life. We get way too caught up in the why of the brokenness of the world and spend way to little on the how this can be used for God’s Glory. Where even his disciples ran into a road block, Jesus saw an opportunity.

Where man sees an obstacle, Jesus sees a way for God’s glory to be known (v.3-5)

What follows is a miracle. Jesus understands his time on Earth is short, and he sends the man to the pool where he had just declared himself the source of living water. He heals the man with the congenital blindness.

What is so interesting to me about this story is that we get the healing in about 3 verses, but the rest of the 41 verses of John 9 is spent on the story of the impact of this life transformation.

John does a great job at the conclusion of the chapter of circling back to Jesus returning to the formerly-blind man. He has been put out of the temple after the Pharisees were done questioning him and they didn’t like his answers.

Jesus says to the man in verse 39 : “For Judgment I came into the world, so that those who do not see may see, and that those who see may become blind.”

We love flashy stuff. We just had a whole season of sparkly clothes, light up beads, and toys we’ve probably already lost or broken. Just think about how drawn we are to literal flashy stuff.

Mardi Gras ends up being a perfect metaphor for an empty world. We clamor, we fight for, we yell so loud, we stake out spots 24 hours in advance to get trinkets and sparkly things that we want soooooo bad, until that last float rolls by. Until we get home. And it becomes meaningless outside of the parade.

Now hear me say, I love Mardi Gras. Anybody who follows my social media knows I took 100,000 steps over the last few weeks because I love it.

Jesus knows that he is about to pay a much bigger price for the spiritual blindness of man than he did for the physical blindness. One cost him saliva and mud, while the other cost him his life as he bore the burden of the sins of the world.

Look back at verses 9-12. After the man is healed, he relays his story. He then has to give it again and again after that for the rest of the chapter. But the most important thing to happen to this man and the people around him, was for his story to be told. Jesus didn’t heal this man because he had some important things for him to look at. He healed the man for the glory of God to be made known. This man’s story isn’t a party trick. It is meant to impact the lives of everyone he encounters and beyond!

So the question today is….

What is your story?

We all have one. And they are all for the glory of God. There will always be people trying to explain the works of God away. However, the beauty of miracles like this and the beauty of the spiritual transformation that happens as a result of a relationship with Jesus, is that he is the only explanation.

I think about my own life…that if anyone is ever pointed towards Jesus because of words that come out of my mouth it is not because of my imperfect speech, it is because of God.
I think about Hurricane Katrina and the pain, destruction, and death that surrounded that time in our city…and the beauty that came from that can only be attributed to God.
The list could go on and on in a room like this of stories that can only be used for good, because God uses them for good.

So I ask again, what is your story?

Maybe the story hasn’t ended up with spiritual blindness being healed, maybe you’re still searching for spiritual healing. I will tell you this: it can only be found in the power of Jesus.

Maybe your story includes your spiritual transformation as a result of Jesus Christ. Have you told anybody? How are you leveraging your story for the Kingdom. In the end, the man who was healed could not claim that story as his own, it was a small part of Jesus’ revelation of who he is to the world.

It is the same way with anyone who has been given a story of transformation. It is not your story to keep secret. It is the story of God’s Grace in your life that you have been entrusted with!

So, what are you doing with it? Start with your “4” then keep going. 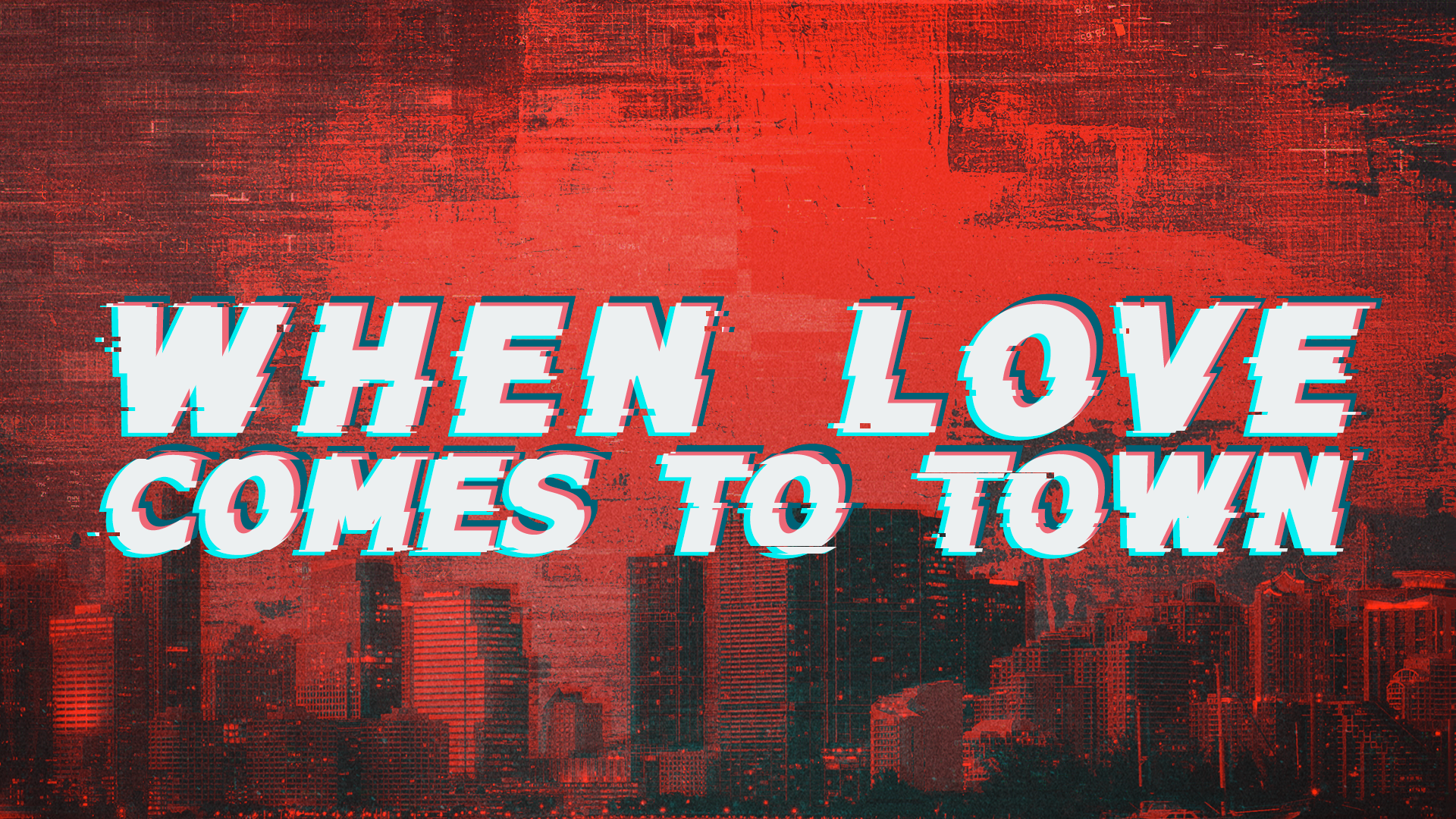 When Love comes to Town is a song by U2 and the great B. B. King. They collaborated...

Did I Not Tell You?

We are in a third week of our series entitled, When Love Comes to Town focusing...

The Light of Life

Our text this morning is John 8:1-12. By way of introduction, I will read selected...

We continue our journey in our series, When Love Comes to Town, this morning. We are...

How is your 4 the City Emphasis coming? Are you faithfully praying for your 4? We have...

A Reality When Jesus was telling of his ministry, he says this, “The Spirit of...

We are concluding a series called “When Love Comes to Town.” We’ve...